The „Menhir“ situated on the „Béisebierg“, near Reckange is the oldest memorial stone created by human being, in Luxembourg. This memorial stone originates from the earlier stone age (4500 years old). The “Menhir”, also called “Hinkelstone” is created with sand stone, is 3 meters high and weighs 4 tons. Over the years, the “Menhir” had fallen over, but in 1978 it has been re-constructed by three members of the “Friends of old Mersch”. Since 2017, this memorial stone has been classified as a National Monument. Eenelter or Elenter is a pilgrim place, where around 1050 A.D: Theobald von Provins has settled himself together with a friend. Three years later they both moved on to Santiago de Compostella. During the Middle Ages, a prosperous market developed around the small chapel. The chapel was destroyed several times, but has been rebuilt.

1896/97 the current chapel was built, in honour of the holy Donatus and the holy Theobald. 1905/06 a part of this palace has been excavated under the direction of architect C. Arendt. In order to protect a well conserved part of the warm air heating system (Hypokaust) for the next generation, a protecting cover has been constructed above it.

When, in 1966 this field “op de Mies” got classified as arable land, the archaeologists were able to justify, that this palace had a volume of 200 x 60 meter and that in front of this palace existed a ceremonious basin, with a surface of 75,6 x 6,5 meters. 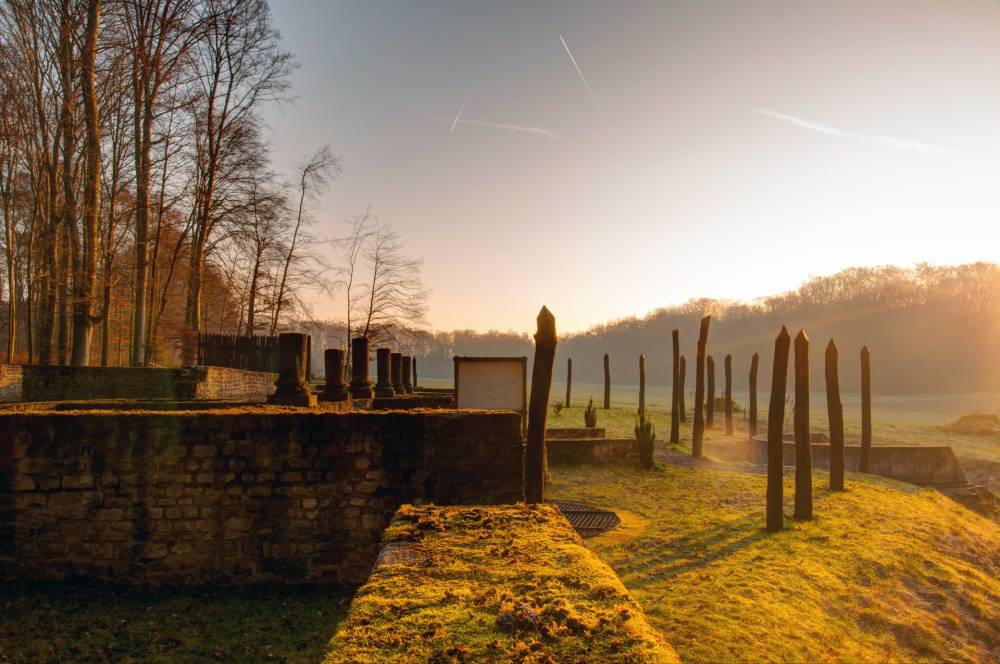 In 1232 Theodorich L bought a property in Mersch, in the purchase-agreement a “turris” is described. This tower is a “Bergfried”, with a square map of 12 meters of length. During a later construction stage, the Bergfried is extended towards the north-west, this we could concede with the following up of the rows of stones. At the end of the 16th century Paul von der Fels and his wife Apollonia von Kerpen rebuilt this fortified building into a castle with a front part in Renaissance style. This castle is now owned by the Community and is now the Town Hall.

The museum in the chapel of the castle

The castle chapel has been inaugurated in 1717. The altar dates from this time and was dedicated to Saint Hubertus. Above the altar we can recognise the marital weapon of the families von Fels and von Elter. The tomb of Fock von Hübingen got a place in the museum, as well as the charity plate from the 14th century. The statue of st. Sebastiaan comes from the former Deanery church. The history of the castle is explained on an information column. With a hight of 21 meters, a length of 17 meters and a width of 13 meters, the former tower is the most impressive residential tower of Luxembourg. 1292 the name of Ferri von Schönfesl was mentioned. At the entrance, you can find the weapon of the family Schliedere (Schloeder) von Lachen.

During the 19th century, the outside of the building got changed in the neo gothic style; the roof constructions were added and the windows were constructed taller. Since 1971, the owner of the castle is the Luxembourgish Government.

Pettingen is one of the best conserved water castles of the country. The square place of each 30m was surrounded by a water ditch of 15 meters. In 1244 Arnould von Pittingen as vassal of Gravin Ermesinde, signed the freedom charter of the city of Luxembourg, Johan der Blinde granted the family von Pittingen the jurisdiction of the supervision van Pittingen.

The fortified building was destroyed in the15th century and rebuilt as a castle in the beginning of the 16th century. The 9x9 meters large tower reminds us of the earlier stronghold of the Lords of Pittingen.

1947 the castle was bought by the Luxembourgish government, for the symbolic amount of 1 Frank.

The parish church of Mersch

After the church at the Michel’s Square had fallen into decay, the actual church with its 3 ships was built from 1844 – 1850 in the classicism style. As example they took the church of Stenay (France).

The house front, carried by for pillars, has a topography with the eye of the divine omniscience. In the side aisles, you can see massive statues of the disciples Petrus and Paulus.

In the thirties of the 20th century the interior of the church was embellished with magnificent paintings, by monk Notker Becker of the Benedikts Abbey of Maria Laach. 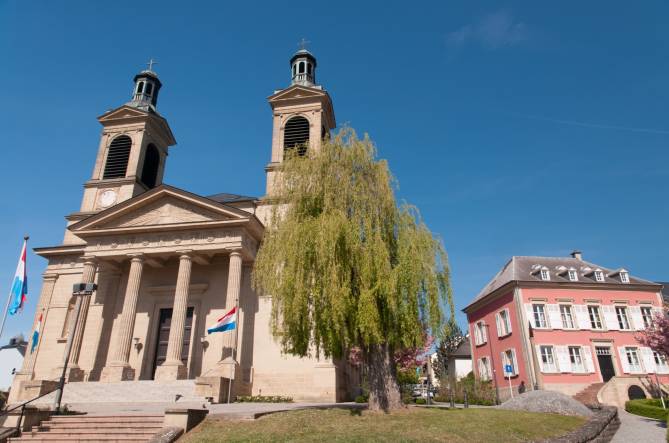 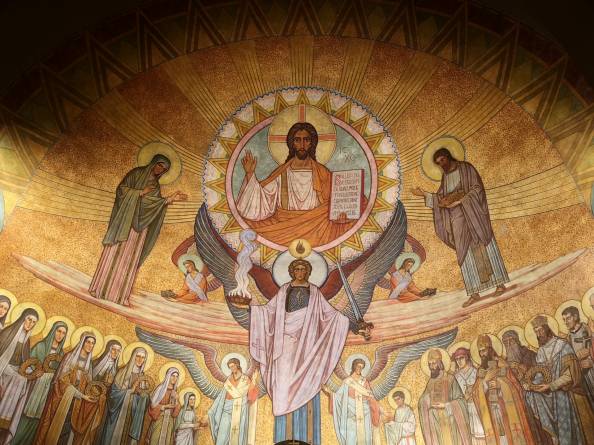 Since 1995, “the National Center of Literature“is situated in the Servais House.

This house was built in 1788 by Philippe Servais in the part of the village, called Udingen-Lez-Mersch. His son, Emmanuel Servais was prime minister, President of the State Council, President of the Chamber of Deputies and Mayor of Luxembourg city. In her last will, Jeanne Servais decided the Servais house to be transmitted to the Municipality with the assignment, to open the garden as a public parc and that part of the house should be a Museum.

In 1939 Luxembourg celebrates with huge enthusiasm their 100-year independence. On the initiative of the city council a Monument will be built as a credence for the patriotic attitude of the population. Spontaneous donations assured the necessary amount and the Monument was created according to the concept of Henri Luja. Four weapon shields, forged I bronze, as well as an inscription from Nik Welter decorate the support. This Monument was never inaugurated, because in September 1939 the 2nd World war started. By order of the Commander Gustaf Simon this Monument was demolished. The still existing pillar stump is a reminder of the former monument.

After the war the city council of Mersch decided to create a new Monument. This new Monument, from Paul Luja, had to remind both our independence as well to the gruesome deeds of the 2nd World war. In 1851, the former church which had fallen into decay, was demolished and, as a result, a marketplace where village life could take place, came into being in the middle of Mersch.

Since the 8th century B. C., there are traces of settlements on the Michels place. In 3rd -5th century A.D., a church existed in a former Roman building. Later we have e mixed church building.

In 853 a church was mentioned in the last will of Erkanfrida, this church was sacrificed to the Saint Michael.

In the 11th century a Romain Church was built, which, in the 15th century A.D., was converted in the Gothic style.

In 1851 at the destruction of that church, coins and sarcophaguses from the Frankish time as well as a partially conserved inscription of a high Roman officer were found on the spot.

During a thunderstorm, in 1706 the lightning had caused a terrible fire. The church was again restored, but the tower had to be rebuilt.

The existing of the Tower is thanks to queen Anna Palowna, wife of Wilhelm II, King of the Netherlands and Grand Duc of Luxembourg. During a visit in Mersch, she asked the city council, not to demolish the Tower, because this onion tower reminded her on the churches in her homeland Russia. At the end of the fifties, during the renovation of the Market place, the tower got a companion in the shape of a Dragon, which was created by Paul Eyschen sculptor from Mersch.

The 3 water-basins personify the rivers Alzette, Mamer and Eich. The 11 Weapons remind us that Mersch is the capital of the canton. The 7 bumps represent the 7 Castles in the Valley of Mersch. At the head of the dragon, we can recognise the grapes, brought by the Romains to Mersch; the floor name “am Wangert” (vineyard) reminds us of that.

The park in Mersch

Mersch is well-known through its unique park. At the beginning, the park had a surface of 3.2 hectares. As of 1997 – 2000 the park expanded its surface to 9 hectares and nowadays, its surface takes up to (covers) 13 hectares. In the flood plain, a small artificial lake came into being. A very interesting playground was created for the children and the youth can enjoy themselves on different creative attractions.

On 21 of July 1862 the first railway section Luxembourg - Ettelbrück was festively inaugurated. The station building of Mersch was also finished in time.

In 1876 the building was enlarged and became a significant identification mark thanks to the extension of the Tower. Since 1989 this train line is electrified.

The railway-line attracted a lot of small industries and small enterprises, so that Mersch developed itself as a railway station, via the earlier Udingen. In 1868 the Servais-family founded a sugar factory opposite the railway station of Mersch. As of 1954, the Merscher Agrocenter developed on an arable land of 33 hectares. This Agrocenter has been demolished and currently a residential area, “Rives de l’Alzette”, is in the stages of development.

The caves to the North of the Schoenfels-forest are very popular and provide an adventurous experience. This subterranean labyrinth of tunnels, corridors and mountain cleaves, is a quarry created by human beings. The total length of these accessible, subterranean tunnels is about 1000 meters. As we don’t have any historical sources, you can develop your own theory. Geology gives us an answer to the question, why our grandparents did this tough and heavy work to dig these tunnels: a combination of different kinds of sandstone, which were located some meters below the surface. Some sandstone was very hard and massive. In order to get these stones, people were obliged to dig tunnels into this mountain.

Open from May till September.

On the west side of the Hardt a well rises between the rocks. This source builds a small pool and flows into the Eisch river; we find ourselves at the “Hunnebour”. With the “Hunnebour” a series of legends are connected to this place. Memories of the “Hunnen”-population come into our minds. Healing powers are attributed to its water.

At the beginning of the 20th century, an association created a cottage to organise festivities here in the forest. In his book “Im Werden und Wachsen”, Nicolas Welter disapproved this intervention in the nature. However, those festivities are not really a success. Rubbish of food, bottles and more is left behind.

In the forest of Rollingen 3 sources close to each other originate from the rocks: “Dreibouren”. This water flows through the small cascade into a bigger lake. On the initiative of Léon Faber, former president of the Merscher “Syndicat d’Intitiative”, this place got adjusted for the public. In 1958 a Monument was founded to honour Léon Faber.

In the neighbourhood of this “Dreibouren” we find an old pilgrim’s place in honour of “Mater Dolorosa”, the “Rollinger Bildchen”. In 1948 a “Lourdes-Cave” was inaugurated. Every 2nd Sunday in September a “Bildchen” procession is organised by the “Friends of Rollinger Bildchen”. 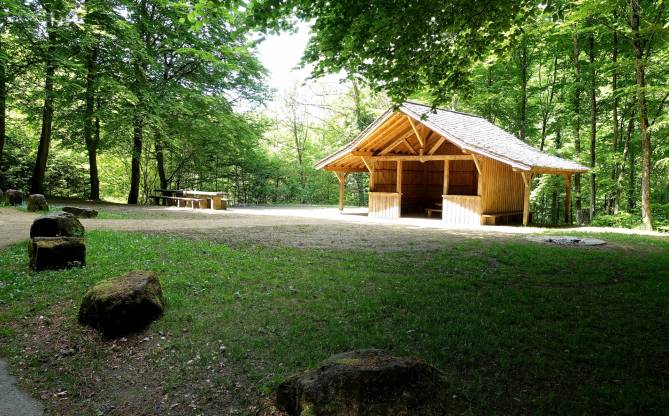 The „Eik of Beringen“. This oak standing on a rock named „Kuckelee”, counts as a „Bonsai tree“. It is almost a miracle that the roots found enough nourishment to develop so slowly; in 1907, a forest ranger described this Oak already.

The “*High Beech of Rollingen” was described by Mr. Faber. In the forest named “Alheck*, this beech, with a height of 40 meters, rises above everting else. On breast height, the straight trunk has a diameter of 97 cm.

In the garden of the “Center National de Literature” of the Servais house stands a tremendous “Copper Beech”, this Beech can be more that 150 years old.

The geographical center of the country

The geographical center of Luxembourg is located in the northwest of Pettingen, in the nature reserve “Pëttenerbesch”.

The geographic center was calculated by the Office of the land registry. The topographic calculation was done by the “World Geodetic System 1984” (WGS84).

The Celts and Romains placed their communities, houses and farms under the protection of their gods. The Christianity took over this devotion. The way crosses are references to reminders of fatal accidents, turned into stone. In 1989, a group, called “Weekraizer Group”, arose around the former dean, Ferdy Fischer, from Mersch. This Group had the goal to save those stone crosses from destruction.